10 of the best brand storytelling campaigns of 2018 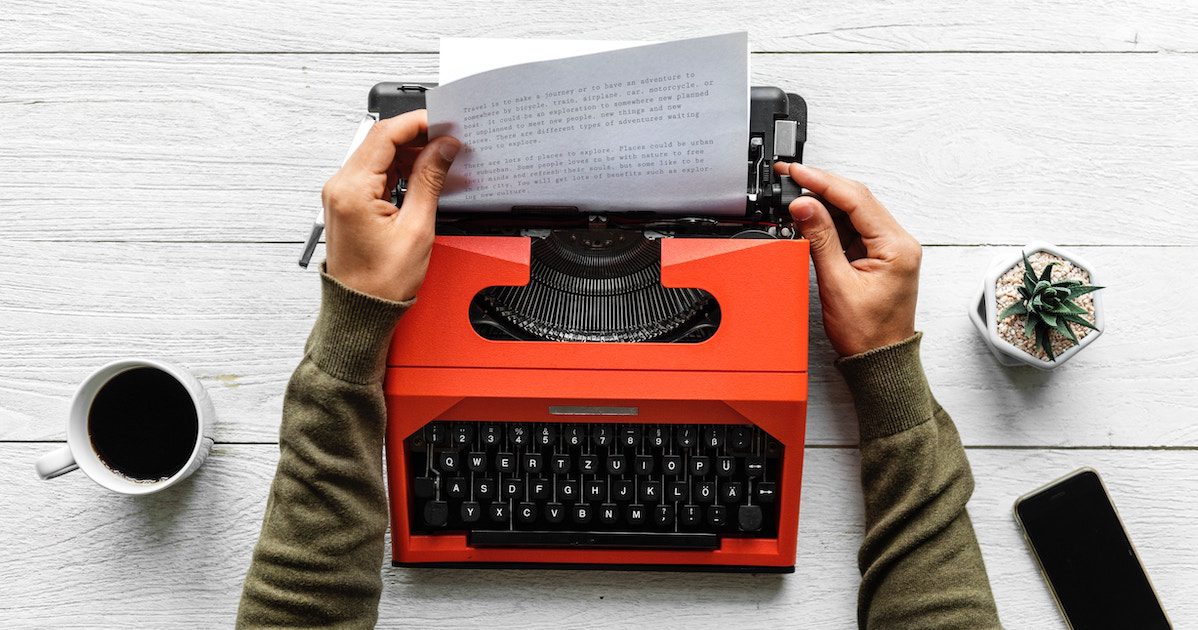 Storytelling is the process of building a narrative to communicate something to an audience. The concept of storytelling in marketing is not a new one, but as content continues to grow as a central tenet of a solid marketing strategy, storytelling has grown in popularity among brands.

Stories forge deeper connections with an audience, and by tapping into the audience’s emotions, can make a brand feel more human. 65% of people that feel an emotional connection to a brand say it’s because “they care about people like me.”

According to a case study by HBR, making that emotional connection is much more important than customer satisfaction. That is because a good story goes a long way to build trust and comprehension. Ultimately, stories have the capability to shape the way that customers see your brand.

From heart-wrenching to hilarious, brands that use stories take the time to build relationships with their audience. Here are 10 of the best storytelling campaigns we’ve seen in 2018 and what you can learn from them.

1. Peloton’s Better is In Us Campaign

This campaign, which premiered during the Winter Olympics, told the story of a working mother and all of the tiny struggles and wins that are a part of her daily life. Throughout everything, this woman found time for an in-home workout on her Peloton bike.

Sourced from customer feedback, this story made the audience feel more empowered to be the best version of themselves – on and off their bike. It resonated with customers who have experienced the rush of motivation you can feel after tackling a challenging workout.

“As we have grown our awareness and success, we’re finally ready to tell the Peloton brand story, and show what that product experience can enable.”
–Carolyn Tisch Blodgett, Head of Brand Marketing

TAKEAWAY: Let your customers inspire the stories you tell. Listen to your customers and how they talk about your products, then tell their stories in your marketing.

Trulia was established in 2005 as the go-to site for online real estate listings. But with increasing competition in this space, the brand realized it needed to focus on a new mission, to “build a more neighborly world by helping you discover a place you’ll love to live.”

With this new mission came the need to tell a new story. The ‘What Locals Say’ campaign tells a series of stories about neighborhoods, each from the point of view of various locals. The campaign highlighted one of Trulia’s key differentiators – local insights – by focusing on the story of the neighborhood rather than the home.

The result is an entertaining approach that taps into one of the biggest deciding factors in the home purchase process.

TAKEAWAY: Let your company’s mission or core values drive the message of the stories you tell.

3. Nike’s Nothing Beats a Londoner Campaign

This campaign features 258 athletes and performers at various levels, including professional athletes, schoolboys, and musicians. Each member of the cast takes a turn boasting about how tough their training is, telling their unique story and describing how they are more hardcore than the next.

The cast was built strategically to include social influencers and celebrities with large followings, requiring them to continue the conversation of ‘one-upping’ on social media. This creative approach to integrating advertising with social media won Nike the top Cannes Lions Award in a new category, Social & Influencer.

TAKEAWAY: Think Social First. Determine how the story will be told on social media, and then backtrack to build out the campaign on other platforms.

4. Budweiser’s The Beer Behind the Music Campaign

Winner of the Grand Prix for Print and Publishing, this campaign features a series of billboards, coasters, and other print collateral (eventually including social media) encouraging people to Google images of various musical legends drinking Budweiser.

Budweiser explains, “These moments are part of our history. But that’s a story we can’t tell.” This is because most of the results from Budweiser’s suggested searches are copyrighted and purchasing those rights would be prohibitively expensive.

Budweiser tapped into the curiosity of people to share images and videos that they could otherwise never include in campaigns. They rely on simple, graphic print media to tell the first part of their story, knowing the audience will take care of the rest.

TAKEAWAY: Stories can be told in a number of ways and on a number of different platforms. Think beyond video.

This campaign, winner of the Grand Prix Lion for Brand Experience and Activation, featured digital content created from a new in-person experience called ‘Today at Apple,’ where customers can come into an Apple store to learn how to create with Apple’s various products.

The program is an attempt to turn the stores into community hubs, and sharing the content from these events fosters engagement and loyalty beyond the purchase of products.

TAKEAWAY: Create stories to share on digital channels from in-person experiences and events.

This campaign introduces the audience to various city dwellers as they go about their days by showing us what is in their shopping cart – including in-demand fashion brands, groceries from local vendors, and other city essentials.

The objective of the campaign supports Jet’s move to reinvent itself, honing in on its target audience: the city resident. By creating a story that other city dwellers can relate to, the brand raises awareness among their target market for their new more personalized website experience and features.

TAKEAWAY: If stories are going to appeal to an audience, they have to be relevant. Identify who your target market is and craft stories that appeal to them.

7. LinkedIn’s In It Together Campaign

This integrated marketing campaign by LinkedIn debuted during the Golden Globes, shifting focus from the site’s capabilities (and their stereotypical customer base) to connecting with their audience by asking the question, “What are you in it for?”

‘It’ refers to “work and everything associated with work, and the answers are as unique as the over 500 million members on LinkedIn. For some, the answer is a sense of purpose; for others, a deep passion…” (Melissa Selcher, Vice President, Brand Marketing and Corporate Communications)

The video ads were created from actual members’ responses to the question. By including members in the ads, LinkedIn was able to promote loyalty and credibility, all while smashing the idea that the site is only for white-collar business people.

This bold campaign from OKCupid used the well-known acronym, DTF and changed its meaning by replacing the F-word with dozens of enlightened alternatives, leading to phrases like “down to feel fabulous,” “down to forget our baggage” and “down to fight about the president.”

The objective was to move away from the ‘swipe left, swipe right’ mentality of dating popularized by apps like Tinder. The brand sought to engage an audience of single people who wished to bring their whole self to dating, rather than be reduced to a snap judgment.

“In the current political and social climate, we felt a responsibility and saw an opportunity to play a part in changing the conversation about dating culture and empowering each individual to reclaim the meaning of DTF and make it theirs,” –OkCupid CMO Melissa Hobley

The campaign, which appeared on billboards and social media, increased buzz by 50%.

TAKEAWAY: Take a stand. Brands often shy away from topics that might be offensive, but embracing new ideas and sharing opinions can humanize and make brands more relatable. 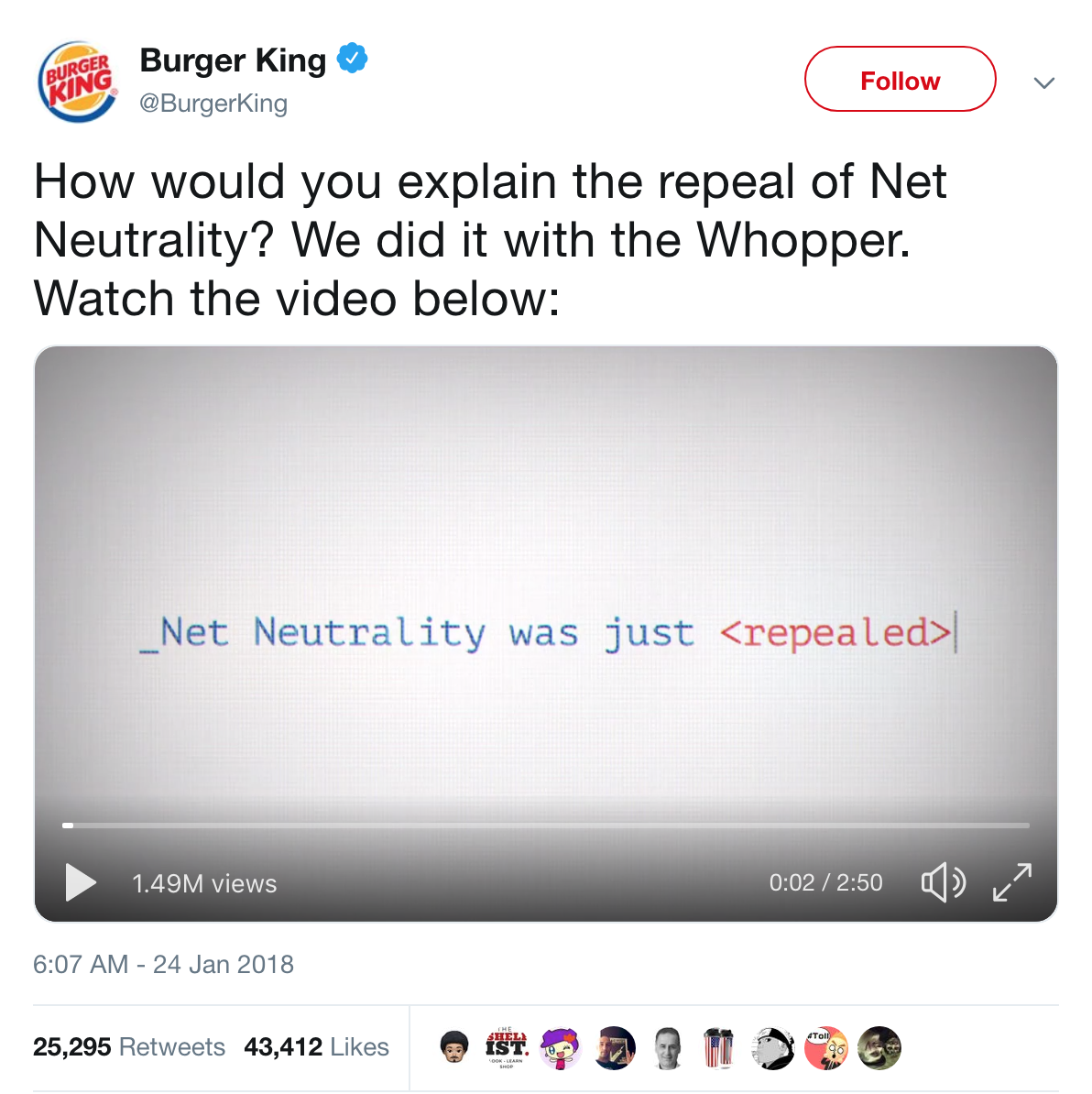 This campaign was successful in explaining the idea of Net Neutrality by applying the idea in Burger Kings around the country. Videos depicted frustrated customers having to choose between paying a lot of money for their burger or waiting a very long time.

TAKEAWAY: Break down complex brand ideas and messages into simplified examples that create a greater sense of understanding.

“A Giant Story” tells the story of two illustrated entrepreneurs, depicting the big and small struggles that business owners face. The story also features a robot, which serves as a metaphor for the way Intuit’s services can help small businesses harness data and technology to make better decisions.

The goal of the campaign is to show how all of Inuit’s brands can be used together. While 46 million people use the brand’s products, only four out of every thousand individuals use two or more of them. Intuit uses this story to show that its products are best when used together.

TAKEAWAY: Each story should have a purpose and relate back to a specific business goal.

Does your brand tell stories in your marketing? Take a cue from the excellent examples above as you plan storytelling campaigns in the New Year, or attend one of our upcoming Social Media Strategy Summits to learn how other brands are killing it with storytelling! 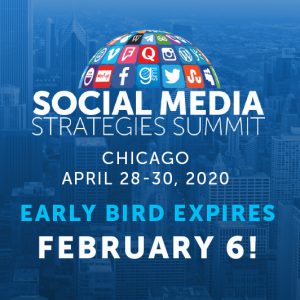